Observation was meant to be a short period of time for providers to assess whether patients required admission for inpatient care, or could be discharged. Typically, this was meant to last fewer than 24 hours and only rarely spanned more than 48 hours. Over the past ten years, the incidence and duration of observation stays has increased significantly, magnifying the inherent problems with the policy.

Medicare considers observation to be an outpatient service and is therefore paid under Medicare Part B. Medicare Part B services have both deductibles and cost-sharing for beneficiaries, which means that the cost to the patient of an observation stay is more variable than a traditional inpatient stay. Time spent under observation also does not count towards the three-day inpatient stay requirement for Medicare skilled-nursing facility (SNF) coverage.

Hospitalists are central players in the inpatient admission decision and see firsthand the impact of observation policy on patient care and on provider workflow. SHM is working toward common-sense and meaningful reforms to observation policy that mitigate the negative impacts on patients and improve the decision-making process for hospital admissions. 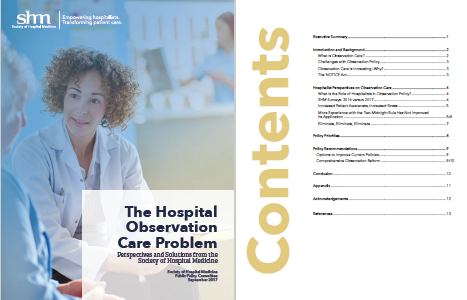 SHM published a white paper, "The Hospital Observation Care Problem: Perspectives and Solutions from SHM," with perspectives from hospitalists on how it impacts their practice and patients and recommendations for policy changes.

Medicare promulgated the two-midnight rule in 2013 in response to the rise in observation stays. The rule is intended to provide a clear time-based threshold for when a patient should and should not be admitted as an inpatient. Any patient whose hospital stay is expect to cover at least two midnights is generally considered inpatient, while any patient who requires less than two midnights would be observation.

The two-midnight rule has been highly controversial and full enforcement began on December 31, 2015.

The Observation Status Problem: Impact and Recommendations for Change