SHM supports legislation that affects hospital medicine and general healthcare, advocating for hospitalists and the patients they serve.

The Infectious Diseases Society of America (IDSA) in collaboration with the American College of Emergency Physicians (ACEP), the Society of Critical Care Medicine (SCCM), and the Society of Hospital Medicine (SHM) would like to collectively share our concern with the Severe Sepsis and Septic Shock: Management Bundle (SEP-1) performance measure and the unintended consequences it may have on the appropriate use of antibiotics.

ACEP represents over 34,000 emergency physicians dedicated to the emergent care of patients who may suffer from a wide array of conditions ranging from chest pain to spinal disorders.

SCCM represents more than 16,000 critical care physicians internationally who are committed to the treatment of critically ill patients who require intensive care.

According to the Healthcare Cost and Utilization Project (H-CUP) Statistical Brief #204, sepsis was the most expensive condition treated across all payers and the second most common reason for hospitalization in 2013.i Given the costs as well as the high mortality rate (182,242 sepsis deaths in 2014), a focused effort is needed to improve sepsis outcomes. Increasing the difficulty to optimally treat septic patients, antibiotic-resistant infections have substantially burdened the health and economics of the U.S. health care system and populationii in addition to causing 2 million illnesses and approximately 23,000 deaths each year in the United States.iii

Understanding the need to address the sepsis issue, the Center for Medicare and Medicaid Services (CMS) adopted the SEP-1 performance measure to the Hospital Inpatient Quality Reporting (IQR) Program in July 2015, with the performance period starting in October 2016. The undersigned specialty societies agree with the need for SEP-1, which requires timely administration of appropriate antibiotics to patients with sepsis or septic shock. However, we strongly believe that all the listed antibiotics in the antibiotic tables for SEP-1 (Table 5.0: Monotherapy Antibiotics, Sepsis, Combination Antibiotic Therapy Table, Table 5.1: Antibiotic Generic/Trade Name Crosswalk, Sepsis) are not appropriate and we believe the use of antibiotics as called for in the SEP-1 measure are not in alignment with prudent antimicrobial stewardship.

In August 2015, ACEP, SCCM, and IDSA expressed concern with the SEP-1 performance measure in a letter to CMS. iv The letter specifically brought attention to the unintended consequences of requiring the administration of specific listed broad-spectrum antibiotics to severe sepsis patients who present with a known infection that responds better to an antibiotic or antibiotics not in the tables. Addressing those concerns, in July 2016 CMS made amendments to SEP-1’s “Broad Spectrum or Other Antibiotic Administration Selection” data element to include the following language,

“If an IV antibiotic from Table 5.0 or an appropriate combination of IV antibiotics from Table 5.1 is not started or given within the 3 hours following presentation of severe sepsis, but there is a lab report or physician/APN/PA documentation indicating the causative organism and susceptibility is known (see exception for C. difficile) and an IV antibiotic identified as appropriate to treat the causative organism is given within 3 hours following presentation of severe sepsis, choose Value "1” v”

We appreciate the action CMS has taken to allow for a process for physicians to exercise clinical judgement to optimally treat septic patients. We also do recognize the difficult situation CMS must address to decrease the high mortality rate and costs associated with sepsis. There is a delicate balance between utilizing clinical quality measures to standardize care according to best practices, allowing physicians to provide patient care that applies their clinical expertise, and addressing the unique clinical situation that is presented.

While this exception is necessary and does not penalize hospitals and subsequently physicians for administering an antibiotic not listed on the SEP-1 antibiotic tables, further effort is needed to promote the practice of antibiotic stewardship to combat the larger issue of antibiotic resistance and unintended consequences including adverse drug events and increased risk for C. difficile infections. This need has been highlighted by the National Action Plan for Combating Antibiotic-Resistant Bacteria developed by the White House in March 2015vi as well as the proposed rule for the Medicare and Medicaid Hospitals Conditions of Participation published in June 2016.vii

Modification of Antibiotic Tables for SEP-1 Workgroup Process and Results

Recognizing the need to promote the judicious use of antibiotics in the treatment of sepsis, IDSA convened a multi-stakeholder workgroup in May 2016 to address the aforementioned concerns. The Modification of Antibiotic Tables for SEP-1 Workgroup (MATS WG) was composed of one representative from ACEP, two from SCCM, one from SHM, and two from IDSA with the goal to strengthen patient safety by promoting the optimal use of antibiotics. The specific objectives of the MATS WG was to evaluate and revise as necessary the antibiotic tables specified for SEP-1 to enable the appropriate empiric treatment of sepsis.

A total of 12 respondents completed the survey. For Table 5.0: Monotherapy Antibiotics, a total of 14 antibiotics were reviewed. Of the 14 monotherapy antibiotics, 9 received majority approval by the respondents, 3 antibiotics were not approved (ampicillin/sulbactam, levofloxacin, moxifloxacin), and 2 antibiotics (ertapenem, ticarcillin/clavulanate) received an equal amount of votes for approval and disapproval. The survey respondents cited a common concern of large amounts of antibiotic resistance as to why ampicillin/sulbactam, levofloxacin, and moxifloxacin were not approved. E. coli resistance to ampicillin/sulbactam has been observed in numerous studiesviii,ix,x,xi. Levofloxacin has been shown to be efficacious against many pathogens, namely pneumonia caused by the Haemophilus speciesxii, however levofloxacin resistance have been observed in H. influenzaexiii,xiv as well as high levels of resistance in P. aeruginosa and E. colixv. Similarly, moxifloxacin has been shown to have very high rates of resistance in C. difficile isolates.xvi As for the antibiotics that resulted in a draw, the MATS WG was polled again to reach consensus on only ertapenem and not ticarcillin/clavulanate (Timentin), as ticarcillin/clavulanate was discontinued due to safety issuesxvii. Ertapenem was ultimately approved by majority of respondents for inclusion on Table 5.0. Furthermore, respondents were asked to provide suggestions for monotherapy antibiotics not listed in Table 5.0. The MATS WG agreed to include 2 antibiotics (ceftzidime avibactam, cefolozane tazobactam) that were proposed to be included in the revised Table 5.0. 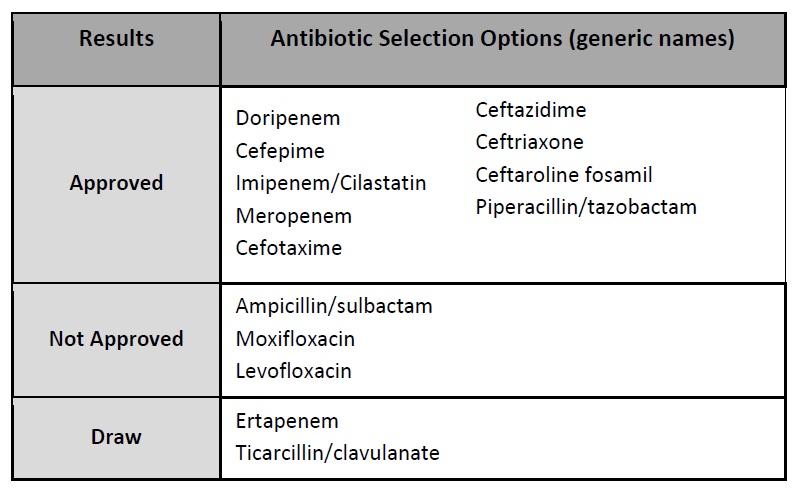 The Combination Antibiotic Therapy Table allows for a total of 21 antibiotic class combinations. Of the total combinations, 10 were approved by the majority of respondents. The antibiotic class combinations not approved for the empiric treatment of sepsis consisted of any combination with macrolides or ciprofloxacin as well as the specific combinations of aztreonam with cephalosporins and aminoglycosides with clindamycin IV. Macrolide antibiotics, predominately administered as the first line of treatment for community-acquired respiratory tract infections caused by M. pneumoniae, have been observed to have high rates of resistance in M. pneumoniae in Asia and moderate levels of resistance in Europe and US.xviii As well, resistance to macrolides in S. pneumoniae has been steadily increasing since the 1990’s.xix With the efficacy of available antibiotics diminishing and the dearth of development of new antibiotics, restricting the use of effective antibiotics with relatively low resistance rates is imperative to preserve an efficacious antibiotic pipeline. Furthermore, the macrolide antibiotic telithromycin (Ketek), specified in Table 5.1 for SEP-1, has been discontinued due to business reasons.xx Ciprofloxacin has also seen an increase in clinical ineffectiveness, particularly in nosocomial gram-negative bacteremia.xxi Additionally, as part of the larger antibiotic class of fluoroquinolones, ciprofloxacin resistance has remained high among MRSA, P. aeruginosa, E. coli, anaerobes, and pathogens found in intensive care units.xxii In alignment with the combinations not approved by the workgroup, concerns with increasing resistance and adequate coverage of pathogens were cited for reasons why the combinations of aztreonamxxiii with cephalosporinsxxiv and aminoglycosidesxxv with clindamycin IVxxvi were not approved. 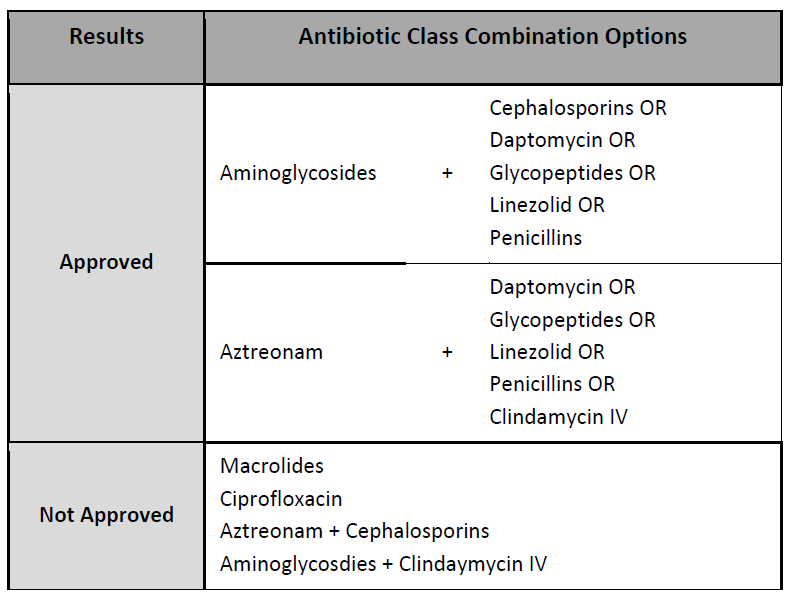 Resulting from the work the MATS WG, we respectfully provide our recommendations for Table 5.0: Monotherapy Antibiotics in Table 4, the Combination Antibiotic Therapy Table in Table 5, and Table 5.1 Antibiotic Generic/ Trade Name Crosswalk in Table 6.

Revisiting the amendments CMS has made to the SEP-1 measure specifications, we believe the addition of cefotetan to the Table 5.1 Antibiotic Generic/Trade Name Crosswalk is not appropriate. Cefotetan is mainly administered as a surgical prophylactic and has resulted in high rates of surgical site infectionsxxvii as well as IDSA recommending cefotetan not be used to treat community-acquired intra-abdominal infections in adults due to increasing resistancexxviii. We respectfully recommend that CMS remove cefotetan from Table 5.1 due to the above-mentioned rationale.

We appreciate the effort CMS has made to address the serious issue of sepsis and hope that consideration will be given to our proposed resolution. We welcome further discussion with CMS and other stakeholders on this matter related to the SEP-1 measure.